In January I went to New York for a few days to run some errands for my family and I took the opportunity to also do some tea related stops for myself. While planning my itinerary, I found a Japanese Tea Ceremony that I had been looking forward to doing again for a long time. The first time I joined a traditional Japanese tea ceremony was in Argentina when I was studying to be a Tea Sommelier and I instantly fell in love with it. I learnt to appreciate Japanese Tea in a different and much more special way… It also made me look for places that hold the traditional ceremony everywhere I go.

So in New York I found Globus Washitsu, a unique space that offers classes and demonstrations of the traditional Japanese Tea Ceremony right in the heart of the city. It is hosted by Tea Whisk and its Japanese Tea Master Souheki Mori.

The Chashitsu (Teahouse) at Globus Washitsu was built as a traditional teahouse from Japan and the whole place feels like a little piece of Japan in New York. Even before entering the teahouse you can hear the sound of the water falling, walk through a path of stones and the re-creation of nature, as it traditionally is. So everything was in place to create the right atmosphere to be immersed in the ceremony. I joined the tea service with two students and there we were, the four of us, ready to forget about the outside world and enjoy “the way of tea”.

We took our shoes off, left our belongings behind and entered the teahouse. We sat on the tatami, on our heels and few minutes later, everything began.  Souheki brought the equipment and the tea, walking in the traditional way, wearing a kimono and moving graciously and as effectively as possible making everything look seamless and effortless. She sat and started preparing the tea. In this occasion I was chosen as the “guest” during the ceremony so I sat next to her. I also got my tea handed first and even received an extra wagashi (sweet). In the pictures you will see the delicacy of the sweets we had. They were handmade by a Japanese baker and brought directly from Japan. On this occasion we had the Mount Fuji and the rising sun to accompany our tea. Both sugary and delicate, perfect to accompany the matcha tea.

Souheki then talked us through the tokonoma, the tapestry and the ikebana she had chosen specially for the beginning of the year and the ceremony. She also read a poem that was a palindrome, about the first dreams of the year and its meaning in the Japanese culture.

As soon as everything started my perception of time changed completely and our surrounding and objects took on a different meaning. In a traditional Japanese Tea Ceremony, everything is there for a reason, has a story or a meaning, nothing is just decoration. You are also there with a purpose, the purpose of contemplation, meditation and tea. You experience that feeling of absolute presence that is so difficult to find and to make it last… I was there, just there. Enjoying the endlessness of time…

The whole experience of being there was special. Globus Washitsu is a real meeting point for people interested or working in the promotion of Japanese culture in every way. I was there sharing my love for tea but surely there is space for everyone. At the end of the ceremony I met Stephen Globus, one of the owners of Globus Washitsu who warmly welcomed me.

I will be back again next year, no doubt! 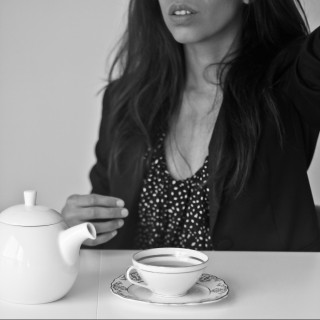 As soon as I discovered the world of tea it instantly turned into a great passion of mine. I had always been a tea enthusiast but it was in 2011 when I did a Tea Sommelier course, that I found a new professional path. Teascopia is everything that inspires me about tea, my personal world around it. I hope you can be inspired too!

( Pause ) . . . #pause #stopforamoment #justtea #teatime #teaforme #tea #onthetable #morningtea #comfort #tealover
Morning tea with a toddler...☺️ Good morning!😴 . . #teascopia #teablog #tea #teatime #toddlerlife #morningtea #goodmorning #justtea #lahoradelté #onthetable #teamum #putthekettleon #jasminegreentea
Mint leaves in hot water 🍃- working table . . . #teascopia #tea #infusion #simple #simplethings #minimal
I have just couple of these cups, they belonged to my mum when we lived in Venezuela. When she moved to USA ten years ago I packed them and sent them in a box so I could use them every time I visited her. This February my mum moved to Barcelona (yes!) and despite everything she let go, I packed the cups once again and brought them home with me. Today I am using them for the first time and I couldn't help but wonder, why I am so attached to these cups...? It might be that they are just one of the few things I get to keep from the home I grew up in Caracas and also, that they remind me of how simple and humble things were in Venezuela. It was a happy place...! They were handmade in Mérida and it was a gift from an uncle to my mum. I am so glad I keep them! En fin, just a mid-morning reflexion over a warm cup of fresh mint on a cloudy day in Barcelona...❤️ x #teascopia #memories #tea #mint #cupoftea #saturday #cloudy #simplethings #justtea #teablog #life #teatime #lahoradelté #té #caracas #simple #onthetable #handmade #merida #venezuela #ilovetea #teaforme #teaforall #minimal #vsco #vscotea
My Tweets